The “Overworld Theme” from the Nintendo Entertainment System game, “Super Mario Bros”, is commonly regarded as the main theme for the game. The melody of this theme is catchy. Even when it is looped over long periods of time, it remains enjoyable to listen to. More than two decades after its initial release, this iconic theme song continues to serve as the unforgettable accompaniment to one of the most important video games in history.

Double bass player, Brandon Wong, and his other schoolmates from the Yong Siew Toh Conservatory of Music will be presenting a performance of Stravinsky's The Solder's Tale.

The Solder's Tale is set across a bouquet of multi-disciplinary art forms including music, dance, drama, fashion and the visual arts. Experience the collaborative artistry of the students from the Conservatory on the score's 100th anniversary.

Yearning to listen to double bass recital in April? This April, visit the Yong Siew Toh Conservatory of Music on 22 Apr 2015 to support Kim Kyunghyun in her graduating recital. Best wishes. 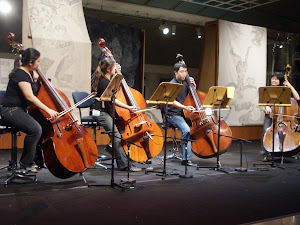